The Heise Entrepreneurial Spirit Award was named in honor of Helmuth and Evelyn Heise, founders of Will O' the Wisp and Wisp Resort, Maryland's only downhill ski resort. The Heise Award is given to one business owner each year that has shown similar entrepreneurial qualities. The criteria for nomination include the following:

The Heise Entrepreneurial Spirit Award Committee, composed of previous winners, will choose 3 finalists and present them to the Board with a recommended winner. Then the Chamber Board of Directors will choose the winner. The winner of the annual award is announced during the Annual Chamber Meeting & Dinner. 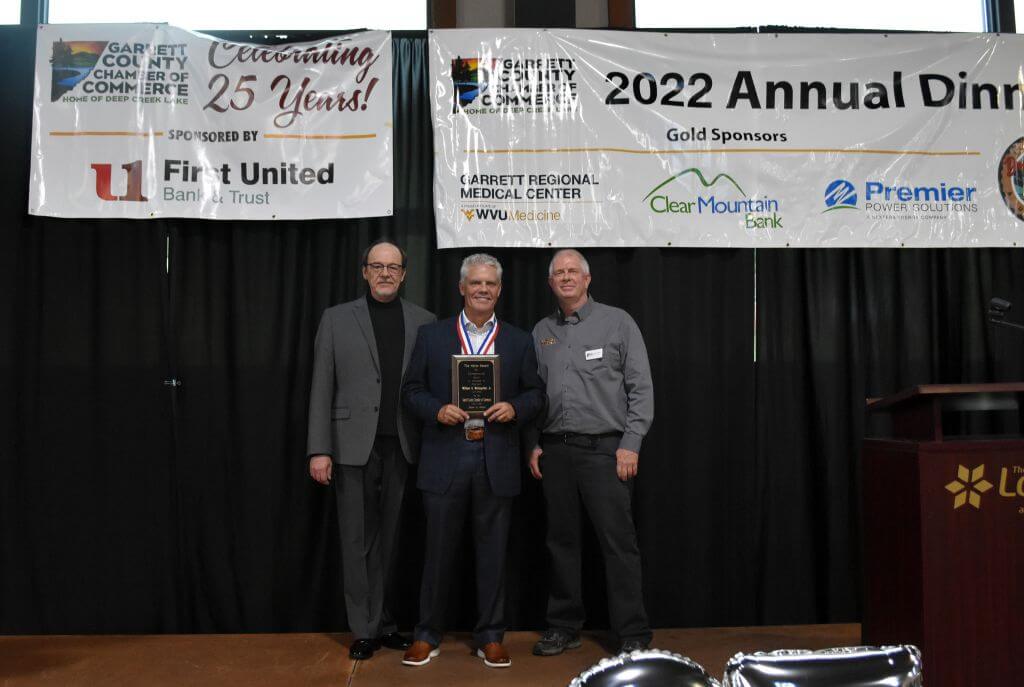 The winner of the 2022 Heise Entrepreneurial Spirit Award was announced during the Garrett County Chamber of Commerce’s Annual Membership Meeting & Dinner on Thursday, June 2, 2022. Martin Heise made the presentation to this year’s winners, Bill Weissgerber co-owner and associate broker of Railey Realty.

Bill’s contributions to Garrett County and the community have made lasting impressions on those who call this place home. Bill is 1976 graduate of Southern Garrett High School, where he painted the first Ram mascot on the hardwood at half court, and was later inducted into the hall of fame. His creative instincts and hardworking personality paired well with his burgeoning real estate career.

Bill began his real estate endeavors at A&A Realty in 1984, where he quickly became the top producing agent, earning multiple national sales awards. He moved to Railey Realty in 1992, earning his associate broker designation and garnering an ownership stake within the company. Bill has been a top producing agent not only in Garrett County, but also in the state of Maryland, often performing within the top 1% of agents in the state.

In addition to his busy real estate career and raising his own family, Bill carved out time to give back to his community. He assisted with coaching the Southern Garrett High Lady Rams basketball team for several years, including two state championships. Following community tragedies close to his heart, Bill started an annual event aimed at raising money for the youth of Garrett County.

In 10 years, the WGW Community Youth Cup raised more than $1M+ for the youth of Garrett County, supporting dozens of organizations in addition to Samantha Funding the Arts, Landon’s Library, and The Andrew S. Woods Memorial Scholarship. The proceeds from this annual event have helped fund the ‘Learning Beyond the Classroom’ school bus, which delivers meals and educational materials to children during the summer months. In addition to his efforts with his own event, he is also an active member on the Garrett County Regional Hospital Board and a board member for Clear Mountain Bank.

“It cannot be overstated the substantial impact Bill has had on our community. He has worked tirelessly over the years to elevate Garrett County through his work at Railey Realty, volunteering, and philanthropy. Recognizing these efforts is what the Heise Entrepreneurial Spirit Award is all about,” said Regina Sweitzer, Interim President of the Garrett County Chamber of Commerce.

Past Recipients of the Heise Award

At the Annual Autumn Glory Kick Off Event, the Golden Ambassador is announced. The winner of this award has made major contributions to tourism in Garrett County. Only Chamber members may nominate fellow Chamber members for this prestigious title.

To nominate someone for this award, please download and complete the nomination form and mail it to Sarah Duck, Garrett County Chamber of Commerce, 15 Visitors Center Drive McHenry, MD 21541 by Friday, September 10, 2021. The winner will be announced at the Garrett County Chamber of Commerce's annual Autumn Glory Kick-Off Event on October 7, 2020.

The Garrett County Chamber of Commerce has named Terry Helbig as the 2020 Honorary Golden Ambassador of the 53rd Annual Autumn Glory Festival. The announcement was made at the Chamber’s Virtual Autumn Glory Kick-Off Event on October 7, 2020. The Golden Ambassador sponsor is Mlend and the Platinum Sponsors of the Kick-Off Event were First United Bank & Trust and Premier Power Solutions, LLC. Patriot Automotive Chrysler Dodge Jeep Ram: King of the 4WD is the title sponsor of the 53rd Annual Autumn Glory Festival. 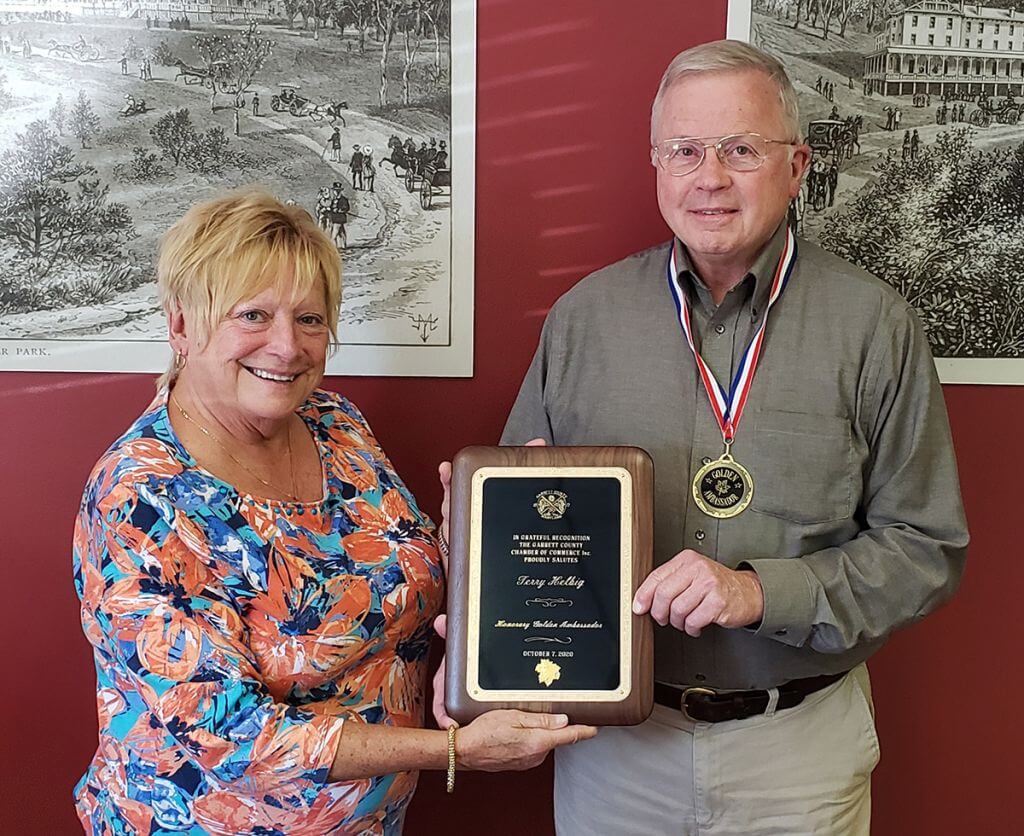 “On behalf of the Chamber and the tourism community, I offer sincere congratulations to Terry on being named the 2020 Honorary Golden Ambassador,” said Nicole Christian, Chamber President and CEO. “Terry is so deserving of this recognition. His passion and commitment for turning the Oakland train station into the B&O museum has created a wonderful experience for visitors and residents. He is a humble servant of this community and I am pleased that we are able to show appreciation for his tireless efforts.”

Terry was born and raised in Garrett County and learned the insurance industry from his father, James Helbig, who worked at an insurance agency in downtown Oakland. Terry founded his own insurance company, Helbig Insurance Agency, in downtown Oakland in 2006 with his late wife, Kathy. With a keen interest in local history and a desire to share that history with residents and visitors, Terry worked with the town of Oakland over the course of several years to turn the town’s 1884 railroad station into a museum. Since the creation of the Oakland B&O Museum, Terry has directed its remodeling and helped to create its exhibits. The Oakland B&O Museum and Train station now features local artifacts celebrating Garrett County’s history, hosts rotating exhibits and showcases artifacts from the B&O Museum in Baltimore. Since the museum’s opening, Terry has hosted a wide variety of groups to the museum and given tours to residents and guests. In addition to hosting visitors to the museum, Terry has also recently worked to obtain funding for the purchasing, and restoration, of a steam locomotive for display on the grounds of the Museum; that steam locomotive is now a popular addition to the B&O Train Station and Museum.

Terry is a current member of the Oakland-Mountain Lake Park Lions Club, where he previously served as President; a charter member of the BPO Elks and currently serves as the Chairman of the Oakland B&O Museum, the committee operating the 1884 station for Oakland. Terry has served as a council member on the Oakland Town Council since 2018, after previous stints in the 1980s and from 2006 – 2009. Terry is also a member of the newly formed Oakland Cemetery Committee with a mission to help preserve local monuments.

Past Recipients of the Golden Ambassador

Volunteer of the Year

Volunteer of the Year Award 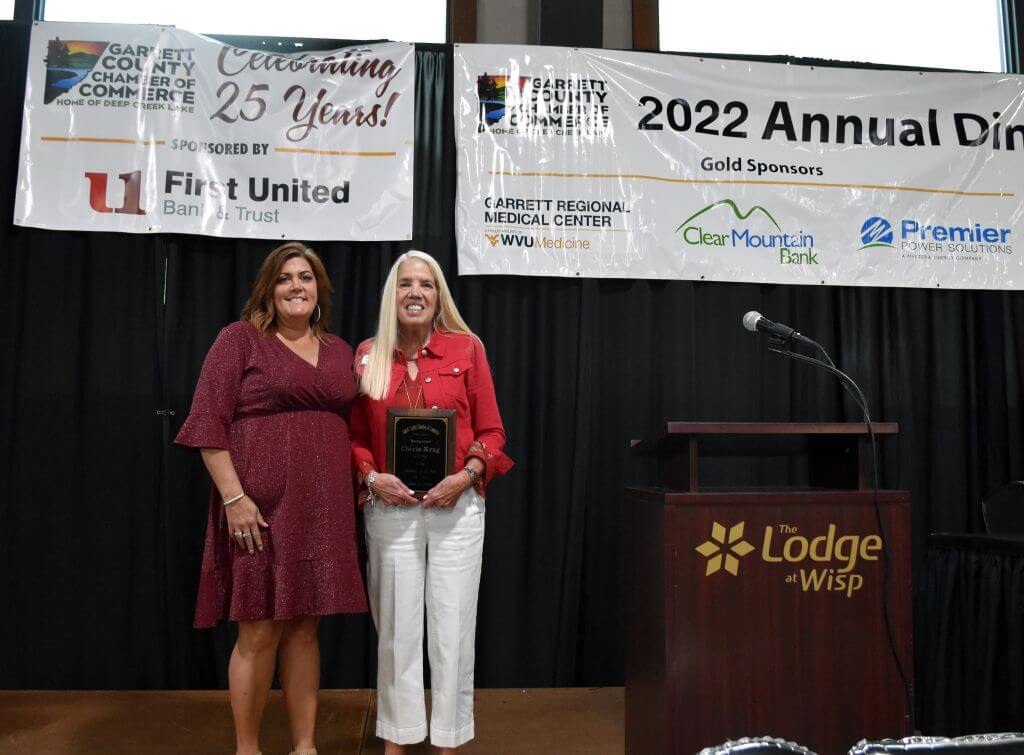 The Volunteer of the Year Award was established in 2011 and recognizes individuals who have provided outstanding service to the Garrett County Chamber of Commerce. The recipient of this award is selected by the staff of the Chamber and recognized at the Annual Dinner.

2022 Volunteer of the Year Winner

Cherie has been a member of the Board of Directors for the Mountain Maryland Gateway to the West (MMGTW) Heritage Area for nearly nine years. Cherie serves on both the grants and marketing committees for the board. In the nine years that Cherie has served on the grants committee, the Heritage Area has awarded over $2 million dollars to local non-profit and jurisdictions for heritage related projects that support heritage tourism in Garrett County. She has helped to grow the Heritage Area’s economic impact to over $155 million. Cherie recently took over the Vice Chair position on the Heritage Area Advisory Board in March of 2022. Cherie and her husband Ron can be found each year volunteering at Victorian Chautauqua and various other local events. In addition to the Heritage Area, Cherie volunteers with the Oakland Rotary Club. Cherie is always willing to help out with various Heritage-related events and volunteers her time whenever asked.

Past Recipients of the Volunteer of the Year Award

Diplomat of the Year

Diplomat of the Year Award

The Diplomats act as greeters at Chamber events, deliver new member packets, deliver membership directories, participate in new member orientations, attend Ribbon Cuttings/Grand Openings/Ground Breakings and present First Dollar of Profit certificates to new businesses. The Diplomat must be employed by a Chamber Member or the owner of a member business, must have been a chamber member for at least one year and employed with their business for at least  6 months. For their efforts, the Diplomats have the opportunity to compete with each other for the title of Diplomat of the Year. The Diplomat of the Year Award was established in 2015.

2022 Diplomat of the Year Winner 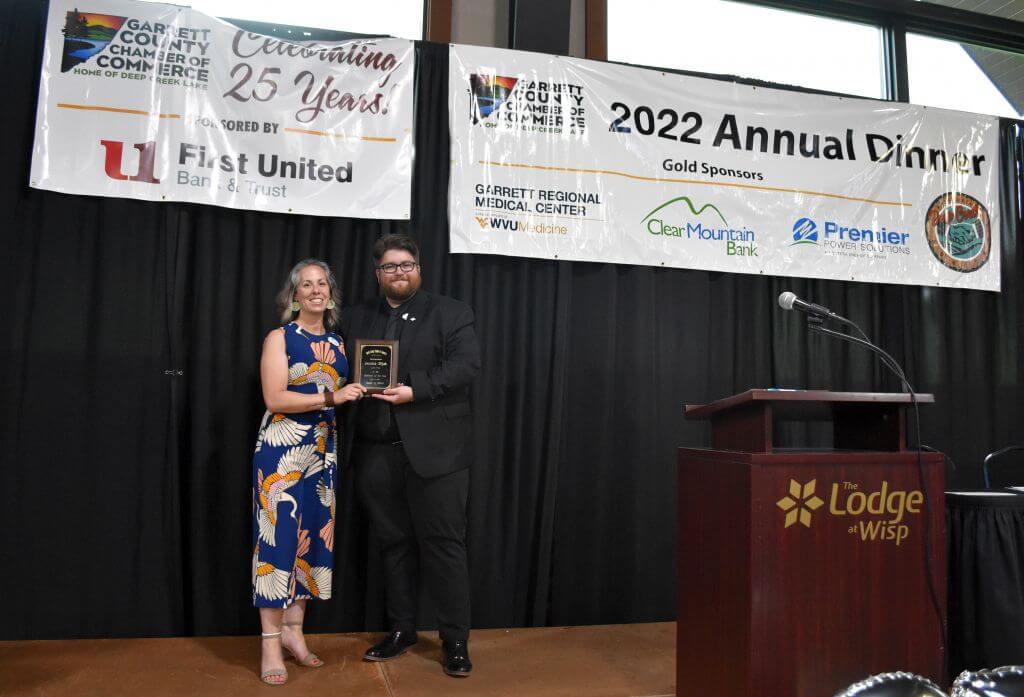 As a Chamber Diplomat, Jessica made member outreach calls, attended Diplomat meetings and Business after Hours, helped in the distribution of both prospect and new member packets, helped recognize new businesses during the 2022 Business & Industry Appreciation, attended 3 ribbon cutting ceremonies, and referred 3 new members to the Chamber, achieving a total of 156 points. This is Jessica’s second year as a Garrett County Diplomat and her second consecutive Diplomat of the Year Award.

“Jessica exemplifies the spirit of the Garrett County Diplomats program,” said Nick Sharps, Chamber Membership Development Manager. “The Chamber is very fortunate to have ambassadors like Jess and the other committee members volunteer their time and energy toward furthering our mission.”

Past Recipients of the Diplomat of the Year Award