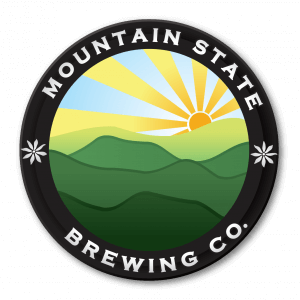 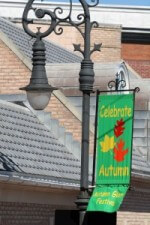 Wednesday, October 12 - Sunday, October 16, 2022
The annual Autumn Glory Festival is a five-day celebration of autumn that celebrates the beauty of the local fall foliage. Additional information about the 2022 festivities will be added as we get closer to the event but see below for information on the 2021 celebration.

The Mountain Maryland Gateway to the West Heritage Area, a program of the Garrett County Chamber of Commerce, will once again offer their annual Turkey Trail, sponsored by the Garrett County Republican, which celebrates the event’s roots by promoting area turkey dinners served in our region. The Heritage Area will also have two new Fall Foliage Driving Tours, sponsored by Advanced Heating & Cooling, LLC and Ledo Pizza, Pasta & Pub, highlighting some of the area’s most scenic spots to view our stunning Autumn leaves.

Garrett County’s annual Autumn Glory Festival landed in the international spotlight in 2007, when the popular travel website, MSN.com listed it tops among fall festivals in the world. In 2021, Travel & Leisure listed Oakland as one of the Best Small Towns in the U.S. to See Fall Foliage which led to a segment featuring Oakland and Autumn Glory on the Today show. Good Housekeeping has listed our Oakland, MD among the Top 50 Small Towns with the Best Fall Foliage; Travel & Leisure listed Oakland, MD as the number 2 Best Town for Fall Colors in America; and TripAdvisor selected Oakland, MD as one of 20 Best Fall Vacations in America for Seeing Autumn Foliage.  Oakland was also selected by U.S. News and World Report as one of 50 Small Towns Across American with Gorgeous Fall Foliage and Readers Digest listed Garrett County as one of the 11 Road Trips That Showcase Stunning Fall Foliage You Need to Take This Autumn.​

Download a copy or request a hard copy be mailed to you.

The Autumn Glory Grand Feature Parade, presented by the Town of Oakland and the Greater Oakland Business Association, will be held Saturday, October 15, 2022. Visitors gather to view regional bands, local professional and amateur floats, dance teams and dignitaries. The parade begins at 1 pm in downtown Oakland on Omar Street and runs down the length of 2nd Street, rounding Alder Street and then ending on 3rd Street near Fox's Pizza Den. Concessions are available on Green Street located across from Naylor's Hardware. 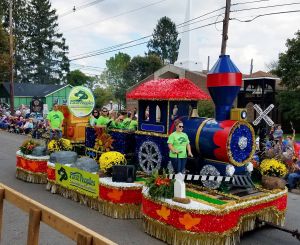 Participants can be drill teams; police/military; drill teams; majorette/twirling, drum and bugle corps, marching musical units and stationary musical units. Professional, commercial or amateur floats are welcome; however it is asked that all entries are autumn-themed in celebration of the annual Festival.

If you're interested in participating, just complete and return your application by Friday, September 16, 2022 to the Greater Oakland Business Association, Attention: Nicole McCullough at 15 S Third Street, Oakland, MD 21550 or you may fax your application to 301.334.4401.

If you have any questions, please contact the Town of Oakland at 301.334.2691 or email mainstreetgoba@gmail.com. 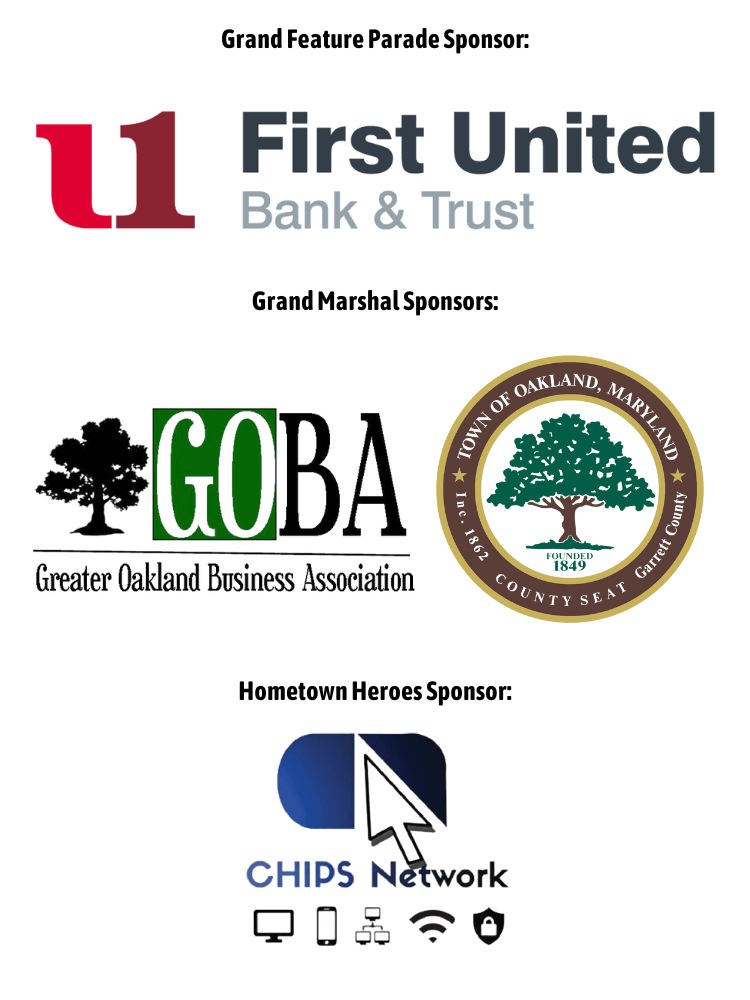 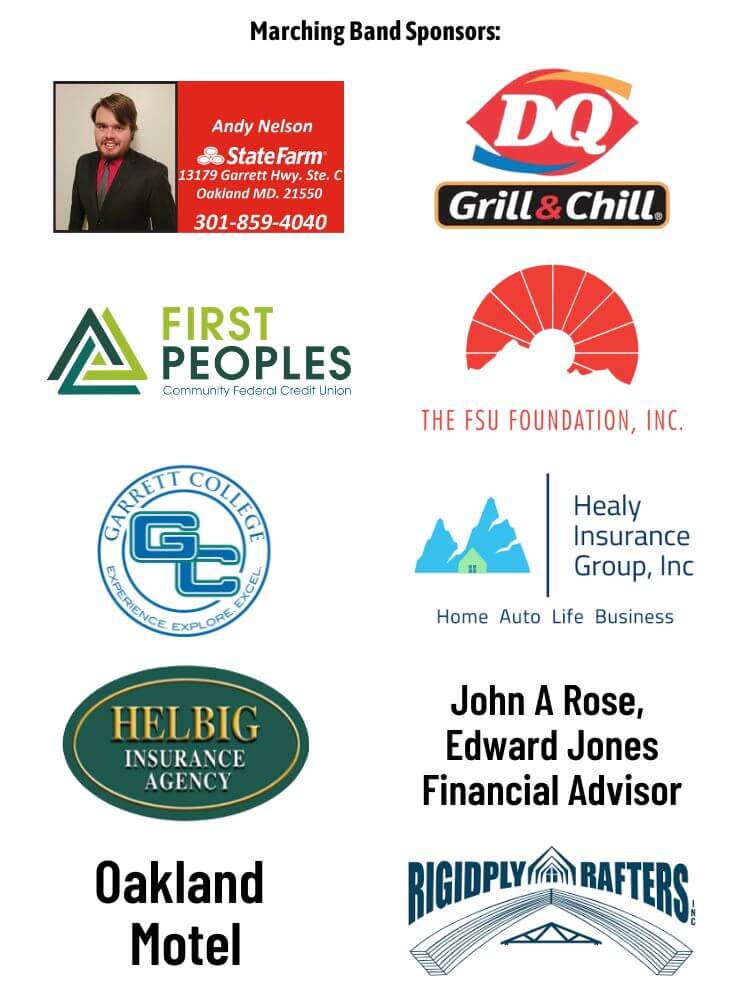 Please note: several Oakland roads will be closed before and during the 55th Autumn Glory Grand Feature Parade, which begins at 1 p.m. Saturday, October 15, 2022.

Garrett Highway/Third Street/Rt 219 will be completely closed to traffic from North 4th Street to Oak Street at 9:30 a.m. Second Street from Omar Street to Alder Street, will also be closed to all vehicles at 9:30 a.m. Traffic traveling north and south through Oakland will be directed to detour via Fourth Street until approximately 30 minutes after the parade ends. Center Street will remain open until 12:45 p.m. and will be closed until approximately 30 minutes after the parade ends. Oak Street will remain open for east/west travel.

Parking along the parade route, which includes parts of Second, Third, Alder and Omar streets, is prohibited prior to and during the parade. Business owners or employees should stop by in advance to obtain a pass to gain access inside the parade route. This includes the handicapped parking at the Masonic Lodge on First Street. Parade passes are only valid until 12pm. Any vehicles arriving after 12pm will not be granted access to the parade route.

Thirty minutes after the last parade entry completes the parade route north of Lake Street, the streets will reopen as normal.

Parking along the parade route, which includes parts of Second, Third and Alder streets, is prohibited prior to and during the parade. Business owners or employees should contact Oakland City Hall at 301.334.2691, Oakland Police Department at 301.334.2100 or the Chamber of Commerce at 301.387.4386 in advance to obtain a pass to gain access inside the parade route, this includes the handicapped parking at the Masonic Lodge on First Street. Garrett County Deputies, Maryland State Troopers and State Highway employees will be assisting the Oakland Police Department with traffic control during the Autumn Glory parade. Oakland Police Chief Bill Thomas encourages anyone coming to the festival and parade to come early to find a good parking space and enjoy the food and entertainment.

Free parking will be available in the town parking lot at the end of Second Street across the railroad tracks. For questions or concerns please free to contact Chief Thomas at Oakland Police Department or Oakland City Hall between 8:30 a.m. to 4:30 p.m. 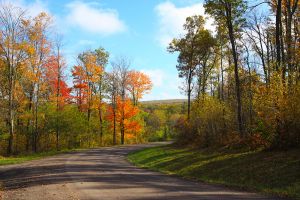 There is no better way to enjoy Autumn Glory than to travel ouor scenic byways and take in some of our beautiful historic spots and vistas throughout the county. Our two Fall Foliage routes provide participants with a guided-tour featuring some of our most stunning vistas and fabulous historic sites. Keep the camera handy and enjoy!

This self-guided driving tour is approximately 40 miles. Highlights on this tour will include a stop by the Deep Creek Lake Discovery Center. Swallow Falls State Park, home of the tallest free-falling waterfall in MD. Stop by the Garrett County Historical Society while in downtown Oakland and enjoy learning about the history of Garrett County and the people that have made Garrett County such a special place to live. Take a break at Broadford Park in Mountain Lake Park, where you can even stop for a picnic before heading back home.

This self-guided tour is approximately 46 miles. Highlights on this tour will include some of Garrett County’s most scenic spots, taking you off the beaten path. Enjoy a stop by Monroe Run Overlook and take in this breathtaking mountain vista. Just a little further down the road and you will come across new Germany State Park. One of eight state parks in Garrett County, New Germany is a local’s favorite for hiking, fishing and a quiet spot for families. The next two stops will find you at Little Meadows Campground and the Casselman River Bridge State Park. The Casselman River Bridge was once apart of the National Road and has a rich history in transportation. Allow your self some time to enjoy this area. There is a lot to see and do here. On your way back enjoy some very scenic backroads and some barn quilts along the way. 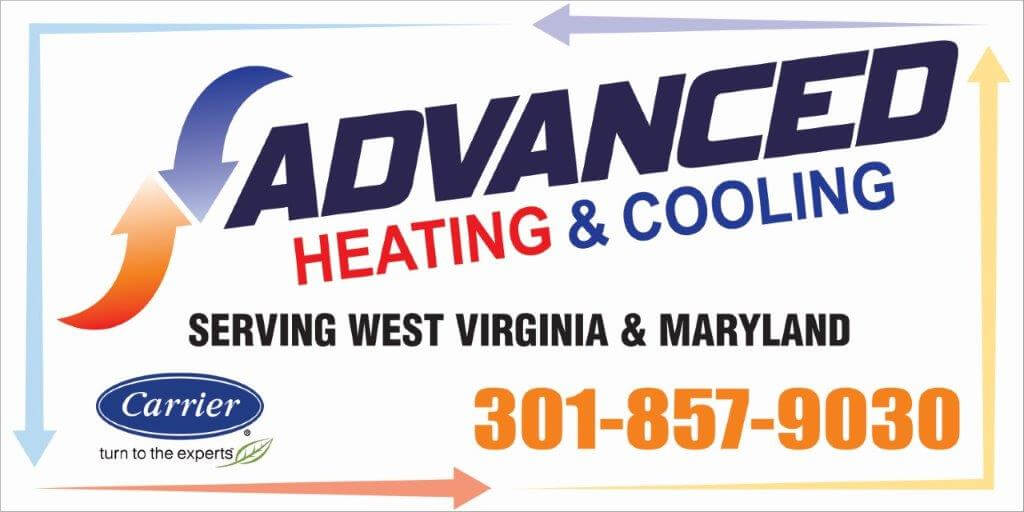 The Garrett County Chamber of Commerce invites you to attend the Kick-Off Reception & Dinner, sponsored by UPMC Western Maryland, for the 55th Annual Autumn Glory Festival on Wednesday, October 12, 2022. Meet Autumn Glory King Landon Grady and Queen Natalie Warne during the Cocktail Hour (sponsored by Act Personnel Service, Inc., Fordham Lee Distillery, and David Trone - Congressman for Maryland 6th District) and bid on the one-of-a-kind canvas during the auction for the official Autumn Glory Photo (sponsored by M&T Bank). Congratulate the winner of the 2022 Golden Ambassador Award (sponsored by Vacasa). Fall-themed centerpieces and decorations are sponsored by Mlend. Following the dinner and program stick around for dancing courtesy of Dinner Entertainment sponsors Premier Power Solutions, LLC and Taylor-Made Deep Creek Vacations & Sales. The Kick-Off Reception & Dinner will be held in the McHenry Lodge at Wisp Resort from 6:00 to 10:00 pm.

Click here for more information and to register for the 2022 Kick-Off Reception & Dinner. 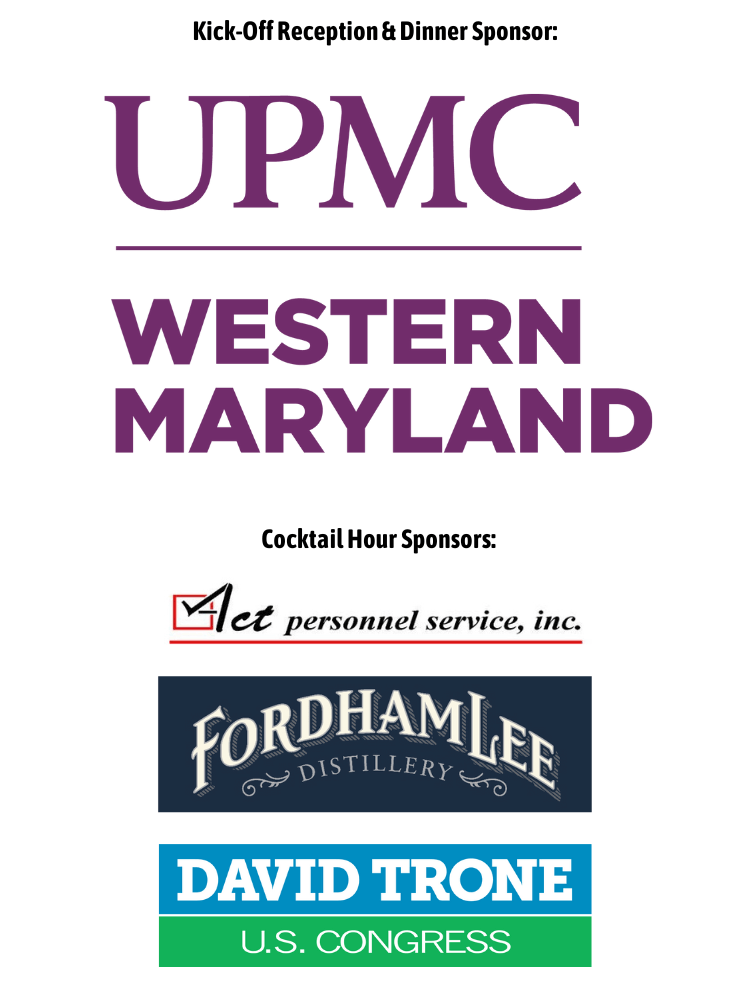 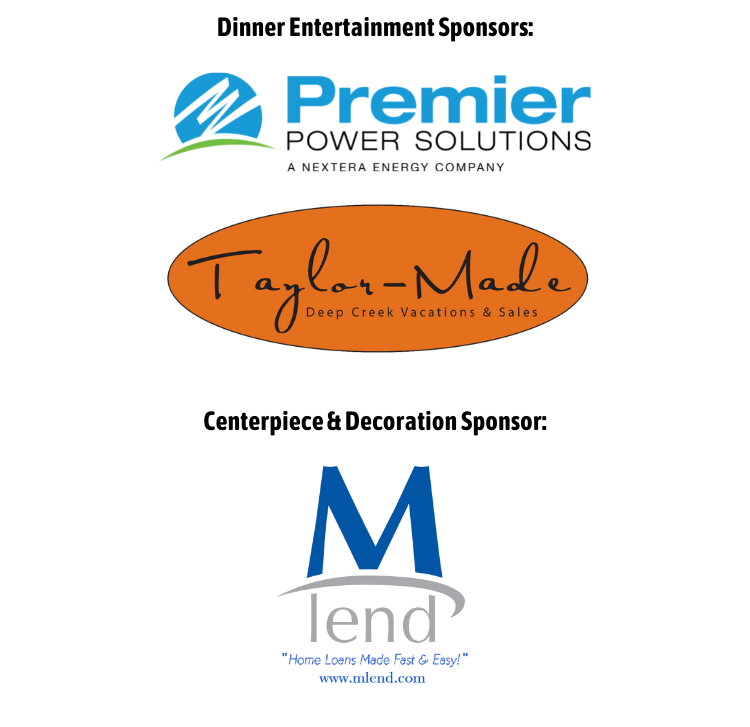 The photo from this year's Autumn Glory brochure cover will be blown up to 20" x 30" and printed on gallery-wrapped canvas. Attendees of the Autumn Glory Kick-Off Reception & Dinner on Wednesday, October 12, 2022 will have the opportunity to commemorate the 55th Annual Autumn Glory Festival by bidding on this canvas to display in their own home or office. Only one canvas is available, though all Kick-Off Reception & Dinner attendees will receive a commemorative gift bag featuring the photo on a magnet and a postcard. 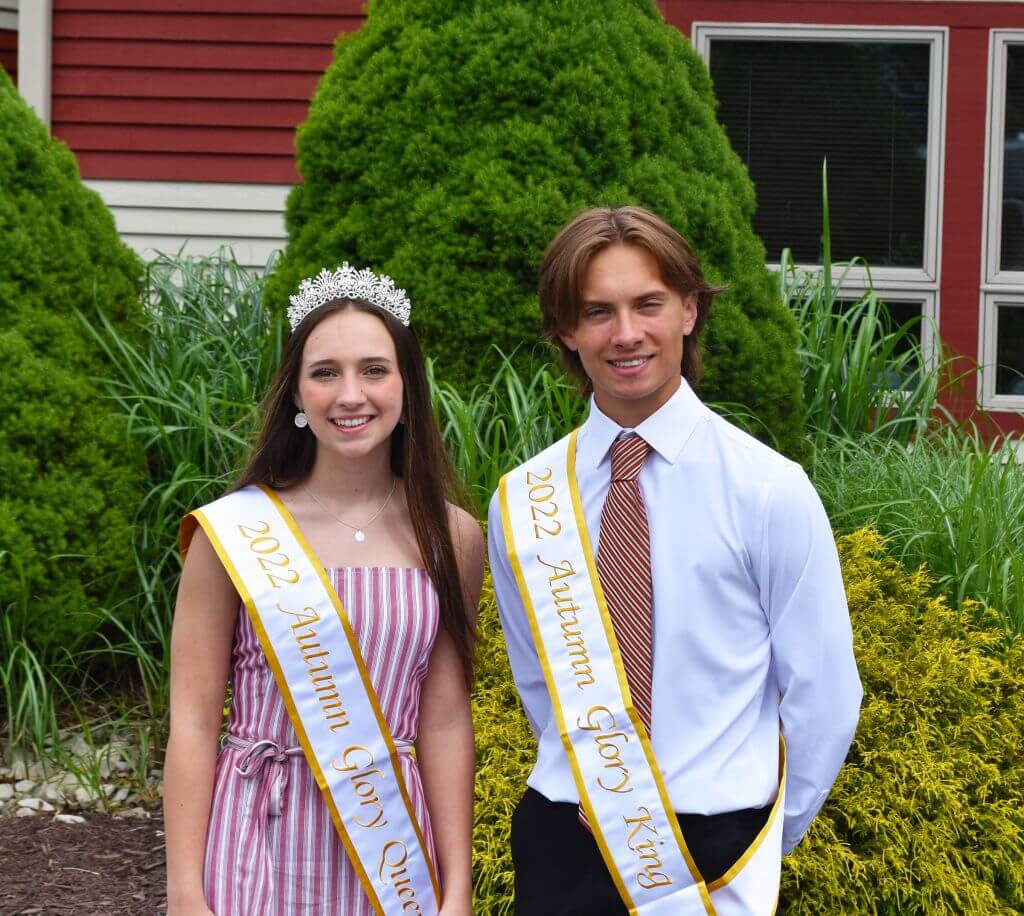 Landon Grady serves as the Southern High president of the class of 2023. He is a representative in the student council and a member of the National Honor Society. He is involved in basketball, track, and the Garrett bass slayers. He helps in the community by volunteering to coach basketball, as a huddle leader for the Fellowship of Christian Athlete summer camps, and is a year-round leader for FCA.

Natalie Warne has had the privilege and honor of being born and raised in Garrett Country a place she truly loves. She is very involved in her community and spends a lot of time volunteering. At Southern High she is a member of the girls soccer, cross country and track team. Natalie has also been dedicated to being a leader in her school as secretary of student council, a class representative, a member of National Honors Society, and a club leader for the Fellowship of Christian Athletes. Natalie is the Director of Public Relations for Garrett County Association of Student Councils. Natalie is also a member of Team 1629 Garrett Coalition (GaCo) where is the Student Member of the Board, and a Chairman's captain. She was a member of the Chairman’s team that won at the World Championship in April. Natalie plans to go to college after high school to get her teaching degree. She wants to give back to future students in Garrett County.

The Autumn Glory King & Queen will preside over the Autumn Glory Kick-Off Reception & Dinner to be held on Wednesday, October 12, and they will be featured in the Autumn Glory Grand Feature Parade, presented by the Town of Oakland and the Greater Oakland Business Association, on Saturday, October 15. Besides having the honor of representing their home county during the Autumn Glory Festival and at other events, the Royalty will receive a monetary contribution towards future educational attainment endeavors. 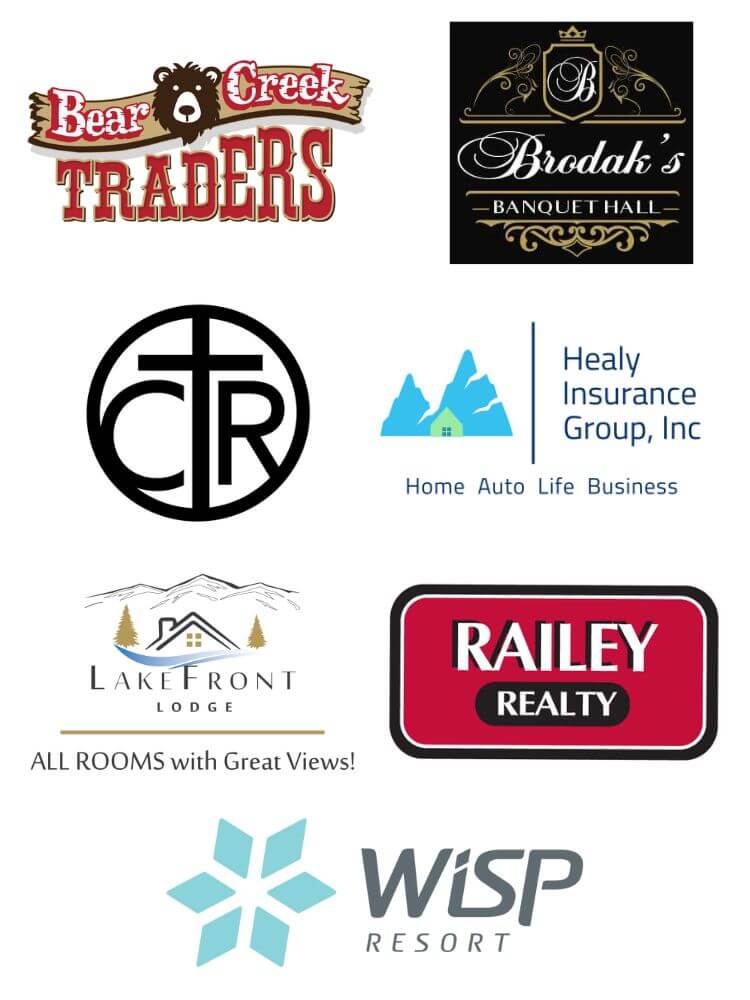 The Turkey Trail is an easy-to-use tool for visitors and residents to locate our county-wide dinners served at restaurants, churches, grocery stores and other organizations. The Turkey Trail flyer contains a map, contact information, hours of operation, cost and the delicious items that are included with each dinner. Turkey dinners around the area offer a variation of turkey, mashed potatoes with gravy, stuffing, vegetable, rolls and dessert. (Check flyer for specific offerings at each location). The Turkey Trail flyer is available at the Garrett County Visitors Center as well as a downloadable PDF online at garrettheritage.com. There, you will also find an interactive map that will help with directions to each of the locations.

If you are interested in nominating someone for this distinction, please complete the Golden Ambassador Nomination Form. Please submit your completed nomination form to Sarah Duck by email at sarah@garrettchamber.com , fax at 301.334.8073 or mail, or drop off, your completed nomination to the Garrett County Chamber of Commerce located at 15 Visitors Center Drive McHenry, MD 21541 by 5 pm on Friday, September 9th.

For the purposes of this award only, Chamber members shall mean owners, employees and volunteers of a Garrett County Chamber member organization. Only one nomination form is required per nominee; multiple nomination forms for an individual will only be used for additional information about the individual but do not count as multiple nominations. The winner of Golden Ambassador title will be announced at the 2022 Autumn Glory Kick-Off Reception & Dinner held on Wednesday, October 12. The 2022 Golden Ambassador Sponsor is Vacasa.